The lovely company Book Pub Co. that has sent me some cookbooks to review has just started up a very awesome “LIVE DELICIOUS” campaign. 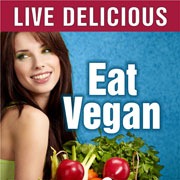 First Check out this video…

While I don’t eat vegan, I do try to introduce lots of plant based goodies into my diet and try to eat as healthy as possible too!!

And I really like what Book Pub Co is doing with this campaign… if nothing else, these cookbooks have great new ideas for becoming healthier!

I think that everyone should pay attention to their body and eat accordingly!

ps. Vegan cookbooks are AWESOME for people who are dairy free –because a lot of times it’s easier to add meat into a recipe that it is to take out dairy!!

What’s in it for you???   You could win a free vegan cookbook just by entering your name and email address in the form on this page. There’s a drawing every month, so by signing up only once, you have multiple opportunities to Win.

The cookbooks you could win include:

The Natural Vegan Kitchen by Chrisine Waltermeyer
The 4-Ingredient Vegan by Maribeth Abrams
Speed Vegan by Alan Roettinger (I have this one and it’s FANTASTIC!)
Becoming Vegan by Brenda Davis & Vesanto Melina
Vegan in 30 Days by Sarah Taylor
Vegan Bodybuilding by Robert Cheeke

Want to know more?  Check them out on FACEBOOK

Keep an eye out for my review of a few of these cookbooks!!  With recipes included!!!